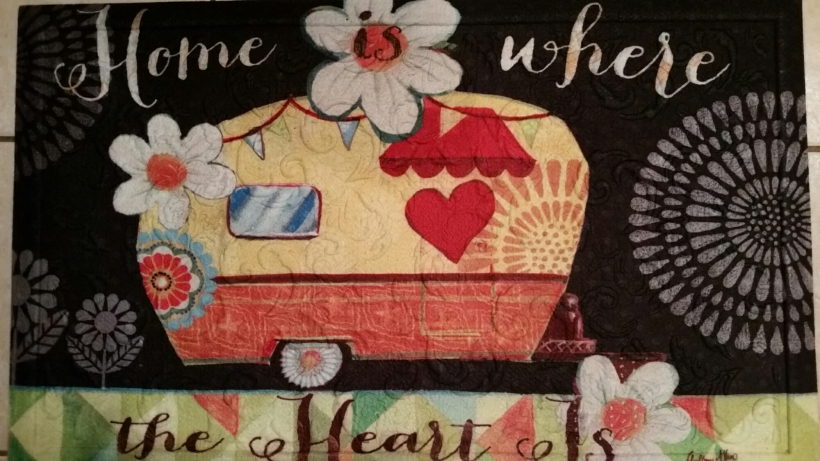 I bought this doormat several months ago. I love the message as well as the whimsical art of it. Me being me, I stashed it with a specific use in mind. Unlike most of my “I’ll put this in a safe place” hidey holes, I actually remembered where it was.  The occasion of its unveiling is the purchase of our 5th wheel. We brought “Helen” home this week. More on our naming later.

This is a culmination of planning and dreaming about what our first years of retirement looks like. It was very emotional,  and not because we spent a chunk of money. Most couples talk about their ideas of what they want “later”. We are like most people: we argue about stupid stuff and we are fiercely loyal to each other. But here it was. Helen had arrived and was ours to play with, prep, etc. Some people get buyers remorse but as I stood inside our future, I have never been so sure that this is what I want to do! So many times in your life, that what you want,  doesn’t always work out. It was a good emotional thing.

The back story to her name is this: we have become binge watchers since we cut the cable. One of the series we watched was a drama about the building of the transcontinental railroad. The town moved along as the track was laid. My cowboy,  well, he likes westerns so I’ve learned to as well. The town’s name (and series) was “Hell on Wheels”. It was a gory, nasty place but we loved the show and the characters (well, some of them). Thus Helen was born.

Helen is a lot of trailer, full of buttons and functions we have to learn and explore. But as my work countdown ticks away, we become closer to a life that we’ve been thinking about for our last third. (I hope it doesn’t turn out to be hell on wheels!)

Home is where the heart is. I like that.

4 thoughts on “Getting closer….”